May 22, 2015Lets Talk Christmas
This post contains affiliate links, which means I will make a commission at no extra cost to you should you click through and make a purchase.

Since 1901, filmmakers and theaters have produced their own interpretations of A Christmas Carol. Every year, for as long as I can remember I’ve looked for another version of the story and decided whether I liked it or not. Now it’s sort of a tradition for me!

Out of all the movie versions of A Christmas Carol that I’ve seen, I’m listing my 7 favorites on this page. At this rate, it’ll be years before I have a Top Ten List!

Let me show you which ones those are, and why. 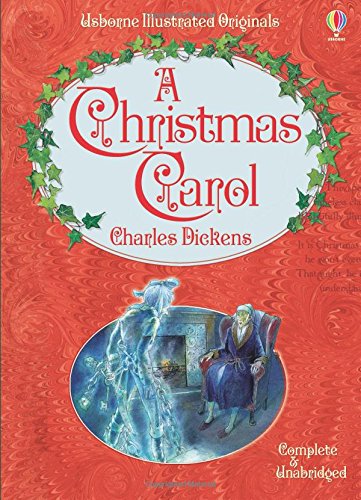 Charles Dickens included much of his own life in his stories & this holds true with A Christmas Carol. He had a very hard time as a young boy, growing up in 19th century England.

His father went to debtor’s prison, which humiliated Charles & he never really got over that. If you recall his stories, many of his characters came from poverty to success.

The endearing characters in all of Charles Dickens’ novels made him one of my very favorite authors.

From year to year, you can find me re-reading David Copperfield, A Christmas Carol or any one of this wonderful books. 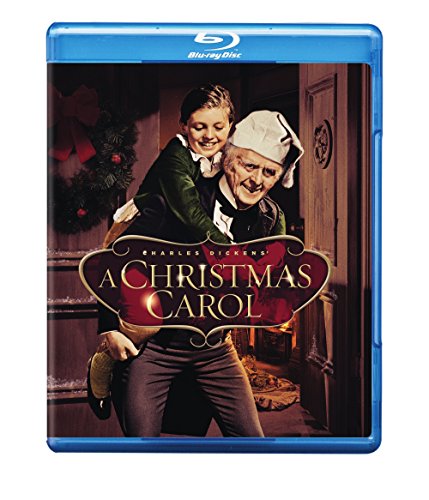 This is my very favorite version of A Christmas Carol!  This version, from 1938 is my all time favorite presentation of Dicken’s A Christmas Carol. I was fascinated to learn awhile back (and it’s also in the Wikipedia) that Lionel Barrymore was supposed to play Scrooge in this movie instead of Reginald Owen. What a big difference that would have made with the famous Barrymore baritone voice. Oh My!

I also enjoy seeing a young June Lockhart making her movie debut in A Christmas Carol as Belinda Cratchit, with her real life parents portraying the Cratchits. She made lots of wonderful movies and appeared in several TV shows, most famously as Timmy’s mother in Lassie and as Mrs. Robinson in Lost In Space.

Leo G Carroll played Marley’s Ghost in this version and did it very well. Carroll was always a favorite, from Charlie Chan movies to Topper and Captains Courageous – he always gave a great performance.

I had never heard of English actor Reginald Owen before A Christmas Carol. When I read about him some time back, I was stunned to see his filmography. Holy Bat Movies, Robin! I found Owen’s partial filmography at Wikipedia, if you care to see it. Queen Christina, A Tale Of Two Cities, Mrs. Miniver and National Velvet are other favorites of mine in which Owens appeared. What a pleasant find. I don’t remember seeing him in those movies, so I think I better rewatch them, don’t you think? *wink, wink* 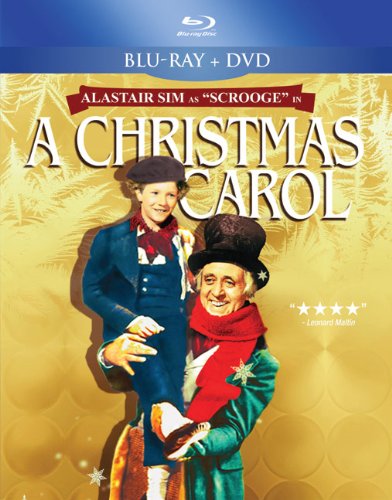 Most of the time, I can’t decide exactly which adaptation of A Christmas Carol is my favorite ~ this 1951 version with Alistair Sim as Scrooge, or the 1938 version with Reginald Owen as Scrooge. In fact, I tend to switch favorites from year to year, LOL.

There’s nothing particularly noteworthy about this version of Dicken’s beloved A Christmas Carol. It’s sweet, heartwarming and excellently performed by all its players. I make an effort to watch it every year.

Sadly, I’m finding that it’s being shown on TV less and less frequently as time goes by. I’m so glad I added this version to my personal DVD collection a couple of years ago. 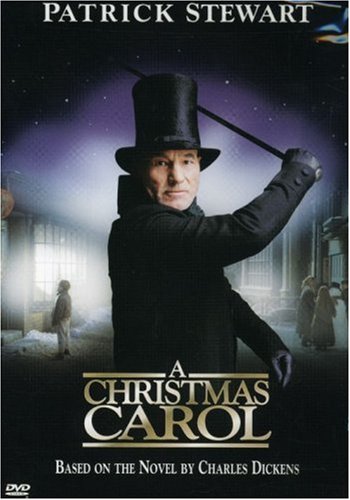 So much effort is being made these days to create more authentic portrayals of these beloved period stories and I’m all for that! The costumes in this movie are incredible! The lighting, decoration – everything, is beautifully done. And who doesn’t appreciate Patrick Stewart’s talent?

It was produced by Turner Network Television, and they show it every year, I’m happy to say. Inspired by Patrick Stewart’s one-man stage performances, this was the first time that digital special effects were used in the movie.

Patrick Stewart was nominated for a Screen Actors Guild award for his performance. This movie is a GREAT way to introduce younger readers to Dickens’ wonderful works. 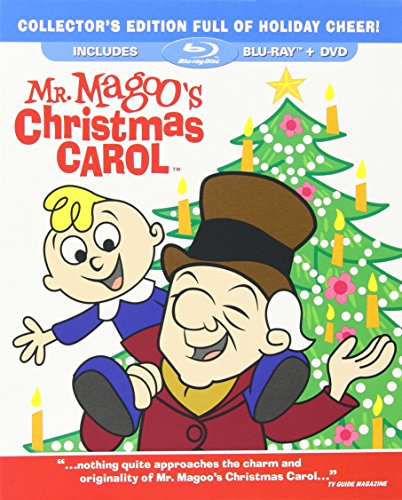 Mister Magoo’s Christmas Carol was commissioned and sponsored by Timex. It was first shown on NBC way back on December 18, 1962. I was five years old and still an only child at the time!

I fell in love with the nearly blind cartoon Mr. Magoo as Scrooge way back then. I still think he’s adorable. This would be another fun way to introduce youngsters to the endearing story of A Christmas Carol. 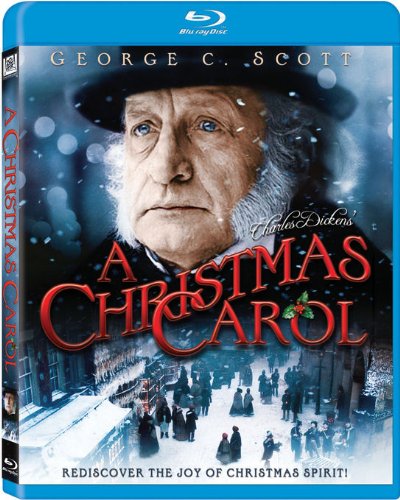 This made-for-television film adaptation of Charles Dickens’ famous 1843 novella was made in 1984 and stars George C. Scott as Ebenezer Scrooge. The film was pretty well received. Many people consider this version as one of the best adaptations of the classic tale. I’m not sure it’s one of the best, but it’s very good.

George C. Scott’s performances tend to be a bit overpowering for me. This movie was the very first time I actually enjoyed watching him. I’ve never seen Patton all the way through, can you believe it? Scott was nominated for an Emmy for Outstanding Lead Actor in a Limited Series or a Special for this performance.

The movie was filmed on location in Shrewsbury, England. It originally aired on CBS on December 17, 1984 in the United States but was released theatrically in Great Britain. Like the Patrick Stewart version, the costumes, sets and screenplay are very well done. There are no special effects or anything else noteworthy about the movie, except for George C. Scott’s performance. It was great! 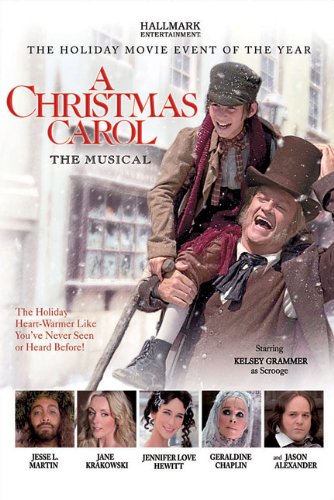 A Christmas Carol: The Musical

If I was apprehensive about George C. Scott’s performance of Ebeneezer Scrooge, I was really dubious about A Christmas Carol as a MUSICAL. This adaptation is a 2004 television movie based on the 1994 stage musical.

Hallmark Entertainment produced it for NBC and featured Kelsey Grammar as Ebenezer Scrooge, Jason Alexander as Jacob Marley, Jesse L. Martin as the Ghost of Christmas Present, and Jennifer Love Hewitt as Emily.

I made up my mind ahead of time that I would hate a MUSICAL version of my beloved Dickens’ story. Within just a very few minutes though, I was completely in love with it. I think you’ll enjoy it too. 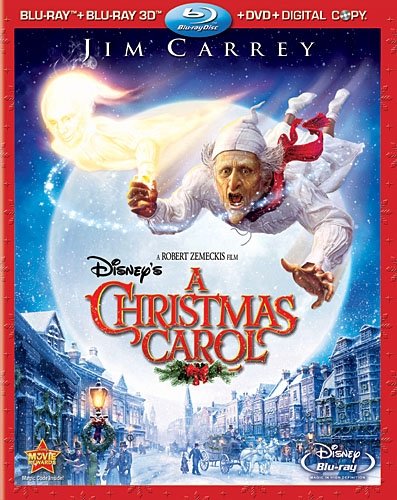 Not being a fan of Jim Carrey, I resisted even watching this movie until 2012. This adaptation was released November 2009 in Disney Digital 3-D and turned out to be the first Disney movie in IMAX 3-D, which I didn’t know.

Gary Oldman was Bob Cratchit, and Jacob Marley, Scrooge’s former business partner. Colin Firth was Fred, Scrooge’s optimistic nephew and only living relative. Bob Hoskins was Mr. Fezziwig, the proprietor of a warehouse business where Scrooge worked as an apprentice and Old Joe, a fence who buys the belongings of the deceased Scrooge from Scrooge’s old maid.

I have to say that I really enjoyed the movie thoroughly. Maybe that was because of the more ‘adult’ presentation of the story by Disney (no Mickey and no Muppets). It was Colin Firth, Gary Oldman and Bob Hoskins that persuaded me to finally check it out.

I was very pleasantly surprised with Jim Carrey’s performance of Scrooge. He has grown into a very versatile actor. Hopefully he won’t find ‘ridiculous comedy’ necessary anymore. I highly recommend this version, although it might be kind of scary for little ones.

A Christmas Carol ~ A Timeless Story

To me, A Christmas Carol is a timeless story of love, forgiveness and redemption.

After all these years and all these versions, the story has never failed to make me laugh and make me cry.

Christmas just isn’t Christmas for me unless I can watch two or three of my favorites from this list.

I wonder which of my favorite versions I’ll watch this year?

What Do You Think About My Choices Of The Best Versions Of A Christmas Carol?